skip to main | skip to sidebar

Lotte Mart has tortillas. That means, with the purchase of (readily available) tomatoes, onions, pepper, and lime/lemon juice, salsa can be made. A trip to an "international" store in any major city can bestow cumin, but we are still left wanting cilantro. Well, forget that. Just add tabasco (also at big box stores). Yum.
Posted by themagicbean at 7:25 PM No comments:

"No" Does Not Exist

In a recent post at Korea Business Central, Koreans' preference for indirectness (to say it kindly) when negative was addressed here: http://www.koreabusinesscentral.com/forum/topics/korea-business-advisor-seoul-magazine-four-principles-to-understa.

I find it a very helpful post, especially if one is new here. This is one of those pieces of advice I heard originally but took me years (e.g., until now) to heed.

Why? And what does that mean?

Well, first, it's counterintuitive. I am not known for being subtle in my home (American litigator = brutally direct) culture, because of a deeply-seated (if borderline irrational) belief absolute directness is best and most honest.

But this year, I understood. And understanding involved me realizing how many asterisks my approach was putting in my Korean dialogues.

What? Let me explain. Korean indirectness works like this:

That's a lot of asterisks. Let them sink in, like the steam from the sauna. Because really, that is saying "no" in Korea.

So you're going to say "no" to your best friends and people you really, really hate. Everyone else gets it softened. "It doesn't seem okay" is a "maybe (slim hope)" back home but here it's a 110% no that you probably won't even be lucky enough to hear (bad news is not often delivered). "They are thinking" more than once means they decided, and you are asterisk-ed.

So if there is hope, you get a yes. If not, you get a later/maybe/I've gotta ask. Really it's the same back home, just adjust the numbers. "I've gotta ask" more than two times means complete incompetence or no chance. "Later" more than a few times means never (picture an attractive mate you ask on a date). Even "Of course" followed by "but something happened" is a social cue, and one we do not press. So why press it here?

Losing Face -- What Does it Mean?

Before you come to Korea, you know "face" and "losing face." But one thing most people don't know is what it really means.

Thus we can say that losing face is equal to death. Or at the very least, "I almost died" and not in the valley-girl or ironic sense.

Soon-to-come posts will discuss Confucianism, indirectness, and other aspects of Korean society that remain only marginally comprehensible to the author but automatic for most of his nation-state coinhabitants.

[And you can thank me in the comments for not beginning a repost session (after a 14-month hiatus) with a passage about "oh I didn't have the time" because I did, I just didn't feel like it.]
Posted by themagicbean at 5:53 AM No comments:

enjoy.
Posted by themagicbean at 9:44 PM No comments:

Soul refilled. That's all I can say and all that needs to be said.
Posted by themagicbean at 7:06 PM No comments: 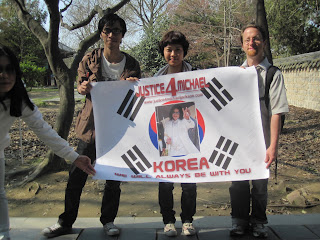 Michael Jackson, in many ways, is like a Korean Cherry Blossom. He is dead and was very pale when alive. And you really didn't see him very often.

Okay that's a bit tasteless but it's the only way to tie in a day of hiking with this picture.

At Geumsansa (Gold Mountain Temple--I could recognize all the Chinese on my own! Woot!) many of the blossoms had already fallen but in the flickr link please see those that hadn't. Most notable are a striking pink and white tree next to each other and a green tree. The subtle differences in color aren't noticed most of the time and the white/pink ones are beautiful but there's something about them together. There was also a cute

Then, walking around Jeonju, we had two women unfurl a Taegukgi with Michael on it. It read "Justice 4 Michael, Korea will always be with you." Cha Won, who is Korean and speaks Korean, translated. For some reason these women were collecting signatures to send this flag-thing to Los Angeles to get Justice for Michael. I get the feeling the fact that it seems to make no sense is not due to language barrier so much as sheer irrationality. So, while I normally ignore people who want me to sign something, I jumped on board with this one. They were kind enough to even email me the pic the next day.

Twice in one set of five arrows.

Take that, chunk of wood!

There is no feeling like having old men who were entirely skeptical about your existence and asked "did he hit one?" be told, by other, more optimistic old men "he hit two" and thinking maybe you actually belong on the shooting line.

Poem (you can't use random words and horrid grammar in conversation, but there's one place it's welcome):

Posted by themagicbean at 6:27 AM No comments:

Search Just This Blog and its Links